skip to main | skip to sidebar

It’s no small coincidence that the stock market is plunging, the war is ongoing, and the scathing critiques of the current administration are all coming to a head currently. 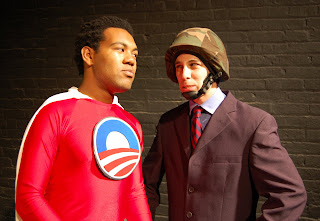 We are but a few short weeks from the 2008 Presidential election; with the lines between our nations free economy and the storied images of freedom blurring into nothing; it’s ever more important that we be paying extra special attention to this one people. So it goes that Nero Fiddled is spelling out their final chapter (one can hope) of the Bush Legacy with their latest work “Life After Bush” playing at hERE (145 Sixth Avenue) in Manhattan’s West Village.

This show could have easily been called “The Idiot’s Guide for Reasons to Vote Obama in 2008,” as anything else, but despite the play’s very left-leaning sensibilities, neither side was spared the rod. With Joe Biden dressed as Peter Pan, Hillary singing her “Evita”-laden concession, and Barack Obama done up in a Super-Bama outfit, even the democrats were not beyond caricature.

“Life After Bush,” was conceived in reality but written by cast members Noah Diamond and Amanda Sisk (who are also co-artistic directors of producing agent Nero Fiddled). The rest of the cast includes Kim Moscaritolo, Avi Phillips, Tarik Davis, and AEA members Brian Louis Hoffman and Sadrina Johnson. David Hancock Turner is listed as the accompanist in the playbill and he did a fine job playing DJ Thacker’s musical arrangements.

The real thing which this reviewer took away from this musical-comedy was actually the dire seriousness about this year’s election. There were a number of fun and funny moments like nearly every time the “McCain” or “Bush” actors entered the scene, with their military fatigued helmet and “Barney” the dog, respectively; the tune “Corporations Are People Too,” and Rudy Giuliani’s eponymous number. While all art is satire and life should never be taken too seriously, the fact is that for all its fun and bravado, “Life After Bush,” never strays too far from the actual reality of what has happened and the stakes which we all will be subjected to.

Two examples which stood out to me occurred at the beginning and the very end; “It’s Been A Bad Eight Years,” and “The American Dream.” During “…Eight Years,” there was a startling photo montage which came up along the back of the auditorium where we are reminded of all the horrific eve 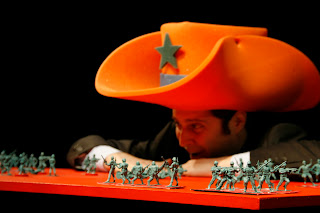 nts which have gone on during this current administration: the levees in New Orleans, Terri Schiavo, Cheney grabbed his gun, the tragedy of Tony Snow, “shock and awe” in Iraq, the even sadder tragedy of America’s Mayor, Bush as “the decider” and so much more. These were all made fun of, yes, but the photographs actually were real; these events actually happened outside of the realm of The Soup; an unsettling realization, indeed.

The rest of the action in this musical includes things which we’ve all seen (unless you’ve been living underneath a rock since the late 1990’s) and swoops around full circle to the end. The cast of characters all come on in plain clothes during the stirring “The American Dream” and each take their turn at the mock voting machine, driving home the importance of every person doing their part. For a comedy piece, this song is a somber piece which tags the shows closing and tugs on all the right reflexes with lines like:

The show had its technical problems (in a space like hERE, especially when you’ve got such fun and cutting lines, everyone should have had mics) but the performances were all pulled off with an insightful amount of skill, humor, and attention to detail.

Many people have already had enough of this year’s election; they’d rather not consider the repercussions of the last eight years; they may just be ready to turn the page. However for others, all the psycho drama leading up to the events which will go down on November 4th and beyond, we geeks are totally jazzed and ready to roll. In “Life After Bush,” there is humor, there is pathos, there is reason to laugh, there is reason to cry, but most of all there should be reason to have hope. That was the driving message in this musical; that all we can hope for, for our future; is some kind of hope for some kind of change.